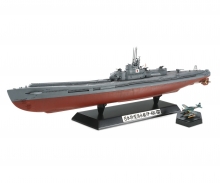 Art.Nr.: 300078019 Artikelbezeichnung: 1:350 Jp. U-Boot i-400 Created as part of a plan to attack major cities in the United States and the Panama Canal, the three I-400 class large aircraft carrier submarines were quite technologically advanced. Featuring an extremely long range and heavily armed with both torpedoes and deck guns, they were also equipped with catapults to launch their three Aichi M6A Seiran aircraft. While on their way to attack the Panama Canal, the submarines were ordered to attack the Allied naval base at Ulithi instead. However, hostilities ended before any attack could be launched. After surrendering to U.S. forces, the I-400 was eventually sailed to Hawaii, where they were studied and then scuttled. - High-quality 1/350 scale assembly kit model of the I-400 submarine. - Accurately reproduced hull features two-piece construction with upper and lower hull sections. - Hangar hatch may be modeled in both open and closed positions for increased display possibilities. - Details such as crane arm and antenna array realistically depicted with precision-made photo-etched parts. - Metal parts for propeller screw shafts provide additional detail. - Parts are included to allow depiction of the Seiran aircraft with wings in both extended and folded positions.   Furthermore, photo-etched parts are used for aircraft propellers and dollies. - Conveniently includes special display base.     Achtung! Nicht für Kinder unter 14 Jahren geeignet. 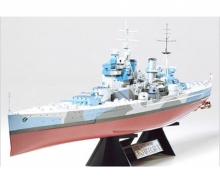 Art.Nr.: 300178010 Art.bezeichnung: 1:350 Brit. King George V Schlachtschiff A Classic British Battleship This kit depicts the HMS King George V, the lead ship of her namesake class of battleships which served the Royal Navy during WWII. Her flat-sided bridge area and distinctive stern shape have been accurately reproduced. Modellers can also enjoy exploring the layout of various superstructure areas such as the navigation and compass decks. Her formidable appearance is completed by her armament of ten 14-inch guns, sixteen 5.25-inch guns, and over 100 anti-aircraft guns. The model comes with a stand and nameplate for a professional display. 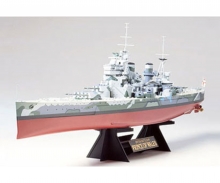 Art.Nr.: 300178011 Art.bezeichnung: 1:350 Brit. Prince of Wales Schlachts. Signaling the End of the Battleship Era The HMS Prince of Wales took part in a number of important actions early in WWII such as the hunt for the German battleship Bismarck. She later had the misfortune to become one of the first capital ships to be sunk by airpower when she was sunk by Japanese bombers together with HMS Repulse. This assembly kit depicts the ship as she appeared during the fateful Battle of Malaya in December 1941. Differences from the HMS King George V, such as the bridge area and anti-aircraft armament, have been replicated. The kit also comes with parts to depict her Supermarine Walrus seaplane as well as Japanese G3M and G4M bombers (1 each). Comes with a display stand with name plate. Length: 649mm, beam: 99mm.   Achtung! Nicht für Kinder unter 14 Jahren geeignet. 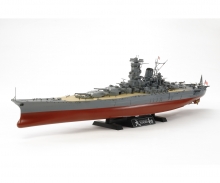 Art.Nr.: 300078030 Artikelbezeichnung: 1:350 Jap. Yamato 2013 Schlachtschiff With many revolutionary features incorporated into her design, the Yamato was completed in December 1941, and met her final fate at the hands of American Navy carrier aircraft in the South China Sea while on a one way mission to Okinawa. This model features minor modifications to Tamiya"s previous Yamato replicas Items 78002 and 78014, and has her looking as she did just prior to departing for her final mission, in an exquisite 1/350 scale assembly kit display model. The Yamato"s massive imposing silhouette is accurately reproduced, and both the main gun turrets and secondary armament turrets can be rotated even after assembly. - Comes with a display stand. - Comes with newly-designed mast parts.     Achtung! Nicht für Kinder unter 14 Jahren geeignet. 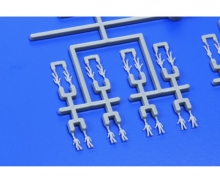 Art.Nr.: 300012622 Artikelbezeichnung: 1:350 Kampfschiff Figuren-Set (144) Recently, large 1/350 scale warships have become more popular with favorable sales of models like the Japanese Navy Submarine I-400. The 1/350 Crew Set will be released as detail up parts to complement our large 1/350 scale warships. This would surely add detail and increase interest in the models. About the model: This is a 1/350 Crew Set for warship model use. 1 Runner has a total of 48 figures (6 positions x 8 bodies) x 3 runners = 144 sailor model set Packaged in a plastic bag with header label (similar to Item: 12601) Figurenset im Maßstab 1:350 Packungsinhalt: 144 Stück, 3 Gießäste mit je 48 Figuren (6 ver. Körperhaltungen / 8 ver. Figurtypen). 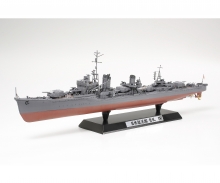 Art.Nr.: 300078020 Art.bezeichnung: 1:350 WWII Japanisch.Zerstörer Yukikaze January 20 1940 saw the completion of construction of the Japanese Kagero class destroyer. Along with her sister ships Hatsukaze, Amatukaze, and Tokitukaze, she became part of the 16th destroyer division under the command of the light cruiser Jintsu. At the beginning of WWII, the 16th destroyer division was part of the force which captured the Philippines, and on December 5 1941, she took part in the fierce fighting with American forces near Palau and supported the invading forces at Legazpi. After wards, she saw action throughout the Pacific Ocean at the Dutch East Indies, Midway, Guadalcanal, and the Solomon Islands. The Yukikaze also participated in the withdrawal of Guadalcanal,also participated in sea battles at the Marianas and the Leyte Gulf. Throughout WWII, the Yukikaze took part in numerous naval battles, escort duties, and supply runs, and always returned safely from each sortie. She was among the few Japanese warships and the onl yone of her class still operational at the end of the war, and can be called the "lucky destroyer." As part of the post-war reparation agreement, the Yukikaze was transferred to the Republic of China, and in 1966 she became a reserve training ship. This is a 1/350 full display model. Model depicts the Yukikaze as she appeared during the 1945 Ten Ichi Go operation (Battle for Okinawa). Parts included to build a waterline model or a display model with full hull. It is possible to rotate the guns and torpedoes after assembling thanks to polycaps. ABS has been used for the masts to ensure strength. Photo-etched parts are prepared for the ladders, radio antennas etc. Metal chains. Display stand included. Assembled model can be displayed in the package.   Achtung! Nicht für Kinder unter 14 Jahren geeignet. 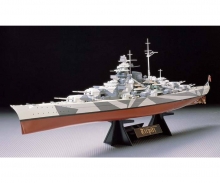 Art.Nr.: 300078015 Art.bezeichnung: 1:350 Dt. Schlachtschiff Tirpitz The sole sister ship of the Bismarck, the Tirpitz was a perpetual worry for the Royal Navy since its presence in Norway was a threat to Allied convoys. Considerable resources were spent countering her potential moves until she was finally sunk by Royal Airforce bombers. Tamiya now brings you this marvel of German engineering as a highly-detailed 1/350 scale assembly kit display model. The elegant lines of the Tirpitz are accurately reproduced and distinguishing features that set her apart from the Bismarck such as quadruple torpedo tubes are also recreated in great detail. The model comes with a specially made display base and a beautiful nameplate for an impressive display.   Achtung! Nicht für Kinder unter 14 Jahren geeignet. 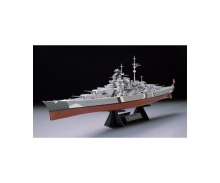 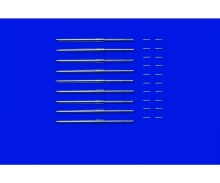 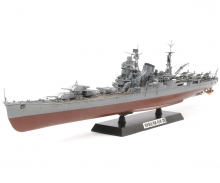 Art.Nr.: 300078024 Artikelbezeichnung: 1:350 Jap. Schwerer Kreuzer "Tone" Commissioned in 1938, the Tone was the lead ship of her namesake class of heavy cruisers. She was 189.1m in length, and was powered by 4 turbines which allowed her to reach a top speed of 35kn. She had a range of 8,000 nautical miles at a 18kn cruising speed and was armed with 8 x 20cm/50 3rd year type guns (4 twin turrets), 8 x 127mm guns, 12 x 25mm AA guns, and 12 x 610mm torpedo tubes and also carried six floatplanes. During WWII, the Tone was present at many of the major Pacific Theater engagements. At the beginning of the war, the Tone was present during the attack on Pearl Harbor and also went on to see action at the Battle of Java Sea, Battle of Midway, Battle of the Eastern Solomons, Battle of Santa Cruz, Battle of the Phillipine Sea, and the Battle of the Leyte Gulf. In July, 1945 the Tone, along with most of the surviving large Japanese Navy warships, was based at the Kure Naval Arsenal. On July 24th, Task Force 38 launched a large scale air raid on Kure and Tone was hit by three bombs which sank her.     Achtung! Nicht für Kinder unter 14 Jahren geeignet. 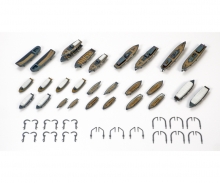 Art.Nr.: 300078028 Artikelbezeichnung: 1:350 US Kampfschiff New Jersey BB-62 This is a 1/350 scale assembly plastic model kit of U.S. Battleship BB-62 New Jersey. It includes detail parts to further the realistic scale appearance in model form. Historical background The USS New Jersey (BB-62) was the second ship of the Iowa-class and was completed in 1943. She participated in a long list of actions from WWII until the end of her illustrious career in 1991. This 1/350 scale plastic assembly model kit of the U.S. battleship New Jersey was originally released in 1984 (Item 78005) and is now available with a set of detail parts to enable the creation of an even more realistic model of this famous battleship. New plastic parts include •12.7cm DP Guns, Mk.37 Gun Directors, Mk.38 Direction Finder, Mk.48 Rangefinder, Mk.13 Radar, Mk.25 Radar New Photo Etched parts include •SPS67 Radar, SPS49 Radar, SRA57 Antenna, SRA58 Antenna   Achtung! Nicht für Kinder unter 14 Jahren geeignet. 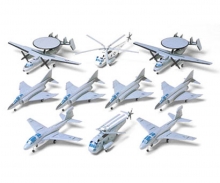 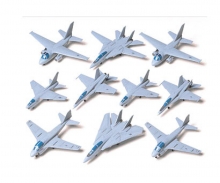 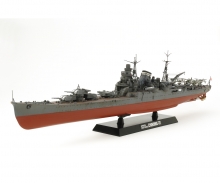 Art.Nr.: 300078027 Artikelbezeichnung: 1:350 WWII Jap. Schwerer Kreuzer Chikuma This is a highly detailed scale model replica in 1/350 scale of the Japanese Heavy Cruiser Chikuma. Historical background Chikuma was the last heavy cruiser the Imperial Japanese Navy constructed during WWII and was completed in May 1939 as the second ship of the Tone-class. Her four twin 20.3cm guns were located at the bow to enable unhindered operation of up to 6 floatplanes at the stern. Her design also enabled a top speed of 35 knots and a long range. She was assigned to the Carrier Mobile Fleet with her sister ship Tone. During the Pearl Harbor Attack in December 1941, her floatplanes carried out pre-attack reconnaissance over the Pearl Harbor, which greatly contributed to the IJN's success of the operation. She was also active during the Battle of Midway and the Solomon Islands campaign. During the Battle of the Leyte Gulf in October 1944, she was the flagship of Admiral Kurita's fleet and contributed to the sinking of the USS Gambier Bay but she was in turn damaged by torpedoes and scuttled off the coast of Samar Island.   Achtung! Nicht für Kinder unter 14 Jahren geeignet. 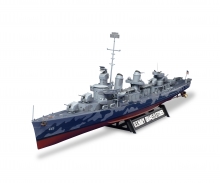 Art.Nr.: 300078012 Art.bezeichnung: 1:350 US Zerstörer DD445 Fletcher A Highly Decorated Destroyer USS Fletcher (DD-445) was the lead ship of her namesake class of destroyers, of which 175 were built during WWII, and she went on to a long and distinguished service career. Her balanced form as well as details such as her 5-inch DP gun turrets, quintuple torpedo launchers, twin 20mm anti-aircraft guns, and depth charge launchers have been accurately reproduced in this stunning model kit. The gun barrels, gun turrets, and torpedo launchers are all movable to enable dynamic posing. A display stand with name plate is also included.   Achtung! Nicht für Kinder unter 14 Jahren geeignet. 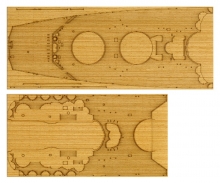 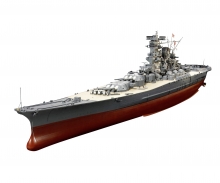 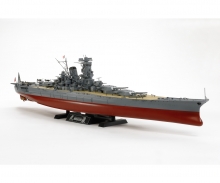 Art.Nr.: 300078031 Artikelbezeichnung: 1:350 Musashi 2013 Jap. Schlachtschiff The Musashi was the second ship in the Yamato-class which were the largest battleships ever built. Completed in 1942, the Musashi took part in various campaigns before finally meeting her fate at the hands of U.S. Navy aircraft in the Battle of Leyte Gulf. Tamiya"s precision-made assembly kit model recreates this giant battleship in exquisite detail, including her defensive anti-aircraft suite of numerous single 25mm cannons on the main deck. This different anti-aircraft armament makes for an interesting comparison with the Yamato. Tamiya rereleased Musashi in 1981 and this great model kit is available again with new mast parts. - Comes with a display stand. - Comes with newly-designed mast parts.   Achtung! Nicht für Kinder unter 14 Jahren geeignet. 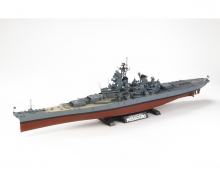 Art.Nr.: 300078029 Artikelbezeichnung: 1:350 US Schlacht. BB-63 Missouri ('91) The USS Missouri (BB-63) was the third ship of the Iowa-class and was commissioned in 1944. During the Pacific War, she supported attacks on Kyushu and Okinawa and then participated in actions such as the bombardment of Muroran in Hokkaido. It is a well known fact that the signing ceremony of Japan’s surrender documents took place on the Missouri’s decks on September 3, 1945. Following the end of the Korean War, she was mothballed at the reserve fleet anchorage but was refitted with various modern equipment to rejoin the U.S. Navy in 1986. Following Iraq’s invasion of Kuwait, the Missouri and her sister ship Wisconsin were deployed to the Middle East and she helped conduct the first firing of Tomahawk cruise missiles in combat during the opening stages of the Gulf War.     Achtung! Nicht für Kinder unter 14 Jahren geeignet.