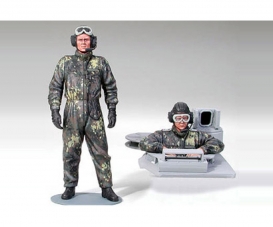 Article number: 300036309 Product: 1:16 Fig. BW Tankcrew Leopard (2) This is a 1/16 scale plastic figure assembly kit depicting tank crew of the Bundeswehr. ★Includes parts for one full-body figure in standing pose, and a torso figure for use in 1/16 scale Leopard 2A6 models. ★Separate parts recreate microphone and headset. ★Clear parts are used to depict goggles. ★Includes decals for various insignia, and a display base. 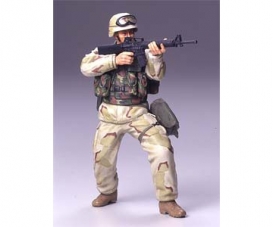 Article number: 300036308 Product: 1:16 Figure US Infan.Man Desert Uniform This is a 1/16 scale plastic figure assembly kit recreating a modern U.S. infantryman in desert uniform. ★The figure is depicted in body armor and vest, with M16A2 rifle cocked and ready to fire. ★A different parts configuration allows assembly with a lowered rifle. ★Camouflaged helmet is recreated with night vision goggles that feature clear parts, while other accessories lend a the model a really detailed air. Modern US Infantryman / Desert 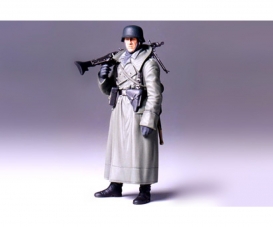 Article number: 300036306 Product: 1:16 WWII Figure Ger. Machine Gunner GC This is a plastic assembly kit model of a WWII German machine gunner wearing a greatcoat and shouldering a MG42 machine gun. The coat features separate parts to depict a wider collar and hems to provide the model with greater realism. Equipment such as the MG42 machine gun and gas mask case have a detailed finish. 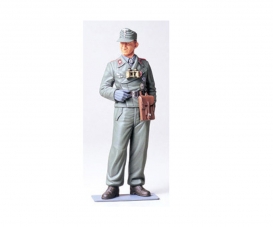 Article number: 300036301 Product: 1:16 Figure Wehrmacht Tank Crewman This is a 1/16 scale plastic figure assembly kit depicting a WWII Wehrmacht tanker. ★Uniform components and decorations are captured with accuracy. ★Comes with two different right arm parts, plus a choice of headgear. ★Separate parts are included to depict details such as the Iron Cross, holster, binoculars and more. 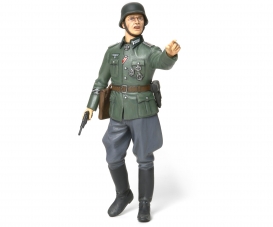 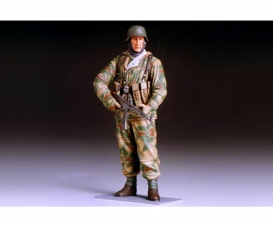 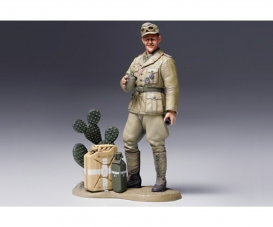 Article number: 300036310 Product: 1:16 WWII Figure Ger.Tank Crewm.Africa Enjoy a Small Vignette In February 1941, German forces were sent to aid the Italian forces in North Africa, which were being pressed hard by the British. This force was led by Field Marshal Erwin Rommel and became known as the Africa Corps. Despite being outnumbered, Rommel led them to many victories over the British through superior tactics. This is a 1/16 scale figure of an Africa Corps tank crewman and it is approximately 113mm tall, enabling the modeler to fully appreciate the clothing details and realistic facial expression. A Relaxed Expression & Abundant Accessories 1/16 scale assembly model kit of a German Africa Corps tank crewman in tropical uniform. The jacket has four pockets, just like the M36 field uniform, and the open neck design is accurately reproduced. Decals are included to recreate the shoulder and lapel insignia as well as the armband. Furthermore, the lower body with the riding pants bunched up by the boots is also realistically depicted. Modelers can also choose to attach the standard brimmed tropical cap or one that does not have a brim. Use your painting skills to bring out the different fabric types and the dusty desert appearance. The relaxed expression of the figure is another highlight. The right hand can also be assembled to hold a canteen or a chameleon, which is of course in 1/16 scale as well. The base on which the figure stands has the atmosphere of the North African front, and a cactus, jerry can, and a canteen with cup are included as accessories, providing modelers with a simple vignette straight from the box.   Warning! Not suitable for children under 14 years. 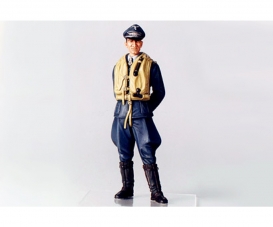 Article number: 300036302 Product: 1:16 WWII Figure Luftwaffe Ace Pilot This is a 1/16 scale plastic figure assembly kit depiciting a Battle of Britain era Luftwaffe pilot in natural pose. ★From the life jacket to the jodhpurs and boots, the uniform is captured in style. ★Choose between a hat or uncovered head. 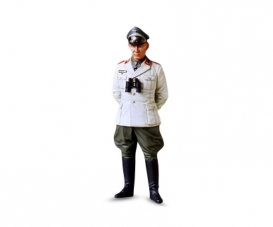 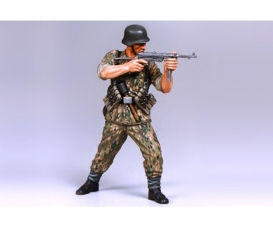 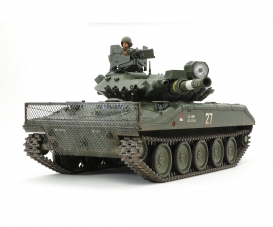 Article number: 300036213 Product: 1:16 US M551 Sheridan (Display) This large-scale 1/16 static display tank recreates the unique M551 Sheridan. The actual Sheridan began development in 1959 and would go on to serve in major conflicts such as the Vietnam and Gulf Wars. It was a lightweight, air liftable vehicle that contributed to the more mobile U.S. forces that were necessary as America took on a more major global security role in the post-WW2 years. This model uses components from the R/C model, for a highly detailed finish. • 1/16 scale plastic model assembly kit. Length: 408mm, width: 177mm, height: 186mm (including gun shield). • The powerful form of the Sheridan with 152mm gun/launcher is recreated in excellent detail. • Features a precision aluminum gun barrel, plus other metal components including lower hull, drive sprockets, coil-sprung suspension arms and more. • Pre-assembled plastic tracks offer wonderful detail, and have soft resin depictions of rubber pads. • Soft photo-etched metal parts are included to recreate the anti-RPG net often seen as an impromptu addition to Sheridan’s deployed in Vietnam. 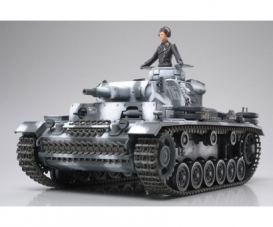