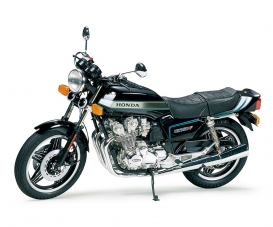 Article number: 300016020 Product: 1/6 Honda CB750F 1979 This is a 1/6 scale plastic assembly kit model of the Honda CB750F, which quickly gained popularity after its release in 1979. ★The beautiful curved lines of the bike have been realistically reproduced. ★The air-cooled inline 4-cylinder 4-carburetor engine features detailed cooling fins and spark plug cables which are depicted with vinyl tubing. ★The metal front forks have a beautiful metal plated finish and coil springs that enable it to move. ★Exhausts also feature a smooth metal plated finish. ★In addition, side covers are removable to showcase the internal mechanisms even after assembly. 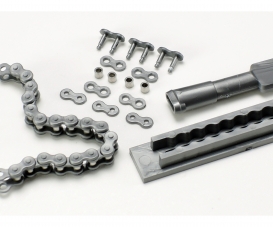 Article number: 300012674 Product: 1/6 Link-Type Motorcycle Chain This assembly-type 1/6 scale chain is designed to go with the 1/6 scale Honda CRF1000L Africa Twin model kit. It promises to add an extra level of unbelievable detail to your masterpiece. •Includes individual assembly chain links consisting of individual plastic plates and metal spacers. •The completed chain will fit neatly onto the drive sprocket in Item 16042 Honda CRF1000L Africa Twin. •Includes a handy jig which aids construction. •Parts included in Item 16042 allow adjustment of the chain tension when it is fitted to the model. 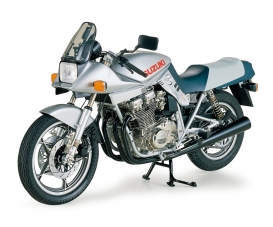 Article number: 300016025 Product: 1:6 Suzuki GSX1100S Katana 1980 One of the most famous motorcycle shows in the world, is held every two years in Cologne West Germany, and the 1980 show is sure to stand out as one of the most unforgettable. One reason was that Honda released their CX500 turbo for the first time, and the second is that Suzuki"s GSX1100S "Katana" (Japanese for sword) was unveiled. The Honda CX500 attracted attention for its advanced engine techniques and the Katana for its advanced and aggressive body styling, which broke from common traditional motorcycle styling. Although the Katana GSX1100S styling impressed the many thousands of viewers, almost everybody thought that it was just for show and the production model would be quite different. During the summer of 1981, Suzuki released the production Katana with almost exactly the same body styling seen at the Cologne show, with subtle improvements in the engine and running gear. The body styling is from the genius of Mr. Hans A. Muth of West Germany, who spent much time ensuring driver comfort in his design, and which proved out in many wind tunnel tests. The entire styling was derived from research on the best drivers position, and the rearward placed backsteps and unique tank styling were not done just for the pleasing jet age appearance. Large capacity fuel tank and small fairing were blended together for the best airflow around the rider and the bike. Although the bike is most noticable for its styling, every part in it is quality. Engine is an air-cooled, parallel 4 of 1075cc, using 16 valves. With the unique Suzuki TSCC (Twin Swirl Combustion Chamber) in the engine, it puts out 111 hp. This tremendous power transmits into a road speed of 230 k/h and its unique body styling deeps it stable even at these high speeds. Suzuki is shipping a 1000cc Katana GSX1000S tot he American market, and also a 750cc version to the European market as well. Requests from Japanese enthusiasts prompted Suzuki to also market a 750cc Katana GSX750S to their market 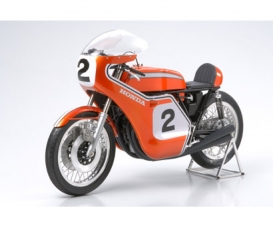 Article number: 300023210 Product: 1/6 Honda CB750 Racing Masterwork About the CB750 Racing When it was released in 1969, the Honda CB750 revolutionized the motorcycle industry. With such state-of-the-art features as a 4-cylinder SOHC engine, electric starter, and front disc brake,the production motorcycle was the perfect base for a racing version. New, lighter materials were used for various engine components, the brake system was modified to use two front disc and two rear leading trailing brakes for greater stopping power, and Dunlop racing tires. It was with this machine that American motorcycle racing legend Dick Mann rode to victory at the 1970Daytona 200 race. About the Model Premium-quality semi-assembled display model of the Honda CB750 Racing. Sleek form of the racing bike, including the rounded windscreen, fuel tank, and body cowlings, accurately reproduced. Polycaps and precision screws ensure easy assembly of the model components. Front and rear wheels feature wheel rims and hubs made from aluminum and wheel spokes made from stainless steel for added realism. Aluminum bike stand conveniently included to display the model. Model is professionally finished in the paint scheme of Dick Mann's 1970 Daytona 200-winning motorcycle. CB750 Racing Semi-Assembled 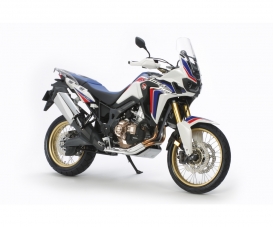 Article number: 300016042 Product: 1/6 HONDA CRF 1000L Africa Twin Enduro This large-scale motorcycle series model depicts the CRF1000L Africa Twin, Honda's modern adventure touring motorcycle inspired by their legendary 4-time Paris-Dakar champion off-road bike. The CRF1000L was released in 2015 and boasts a 998cc parallel-twin engine with a reported 92hp, plus an array of technology such as dual clutch transmission, selectable torque control for slippery surfaces, and ABS brakes. This assembly kit captures the bikes most minute detail in every way. It is sure to wow the most discerning model enthusiast at this very large scale! 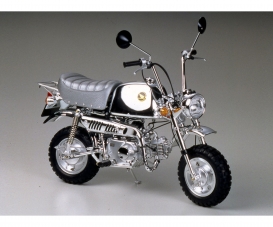 Article number: 300016031 Product: 1/6 Honda Gorilla Spring Collection About the Honda Gorilla Spring Collection In 1967, Honda Pioneered the field of "leisure motorcycles" with the release of the Monkey. The uniqueness of the Monkey made it an instant hit among the young and young at heart. In August 1978, Honda released the big brother of the Monkey and appropriately named it "Gorilla". Save the gas tank and seat, the Gorilla adopted fundamentally the same parts as the Monkey. The most defining aspect of the Gorilla is its swelled chest, an oversized gas tank, which boasts a capacity of 9 liters providing a 630km maximum running distance. Its powerplant was a 49cc air-cooled single cylinder SOHC engine, which was also used on Honda's best selling Super Cub. The Gorilla was also equipped with a manual 4-speed transmission, opposed to the automatic 3-speed system of the Monkey. Production was ceased in 1992 but the popularity of the machine, however did not dwindle, with the few remaining used Gorillas fetching premium prices. It was in February 1998 when Honda resumed production, this time bringing out a new Gorilla equipped with the Monkey's large headlamp and using chrome parts on the headlight casing, fender and other places. January 1999 saw the production of 3500 "Honda Gorilla Spring Collection" machines. This version was meant to shine, and features chrome parts on virtually every visible part of the bike. The gas tank, the side-cover, the front forks, the chain case, the wheels, the exhaust pipe cover, even the frame and swing arm glisten with gorgeous chrome. About the Model ★1/6 scale plastic assembly kit. Overall length: 226mm, width: 104mm, height: 183mm, ★Every characteristic of the 1998 version of the Honda Gorilla such as the larger headlamp, front fork, tank cap and emblems applied on the tank have been accurately replicated. ★Chrome-plated areas of the actual machine have been reproduced with metal-plated parts. 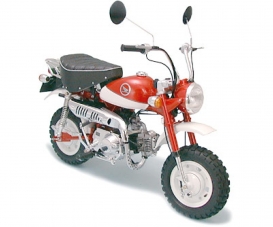 Article number: 300016030 Product: 1/6 Honda Monkey 2000 Anniversary About the Honda Monkey 2000 Anniversary It was back in 1961 that a curious mini-motorcycle was seen putting around Honda's "Tama Tech" amusement park. One of the most popular rides in the park, it sported a red frame under a white gas tank, tiny 5 inch tires and a peppy 50cc engine. Riders were said to appear, of all things, simian, and henceforth the motorcycle came to be known as the Honda Monkey. Looking more like a toy than a motorcycle, the compactness and fresh appearance of the Monkey scored high with fans of all ages. Honda revamped the Z100 park version for use on public roads, and brought out the CZ100 model which began to be exported in 1963. The first model to be marketed in Japan was the improved Z50M Monkey, which featured folding handlebars and seat for easy stowing in a passenger car. In January 2000, Honda brought out the 2000 anniversary edition of the Monkey, which sported the image coloring of the 1971 Z50Z(2) model. The production of this special Monkey was limited to 3000 motorcycles. The continued appeal of the Monkey must be both its diminutive size and ease of customization. Each Monkey owner is free to interchange any number of components including the engine parts, carburetor, exhaust pipe and suspension. In fact, over 1500 custom parts are marketed for this playful mini-bike.