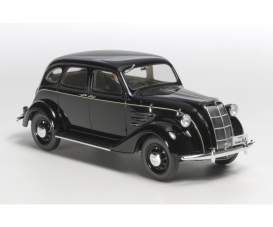 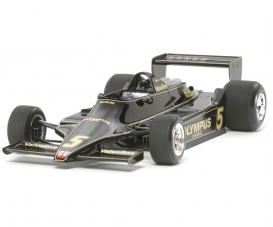 Art.Nr.: 300020060 Artikelbezeichnung: 1:20 Lotus Typ 79 1978 •1/20 scale plastic assembly model kit of the Lotus type 79. •The front and rear upper cowls can be removed after assembly to view the engine and cockpit area. •The monocoque chassis, suspension, and engine have been precisely reproduced. •Synthetic rubber tires included. •Top quality decals to depict the Lotus seen at both British and German GP's, which did not feature JPS markings, are included. •Newly designed tires and metal funnel covers included. •Add further detail to your model with Item 12635 1/20 Lotus Type 79 1978 Photo-Etched Parts Set. 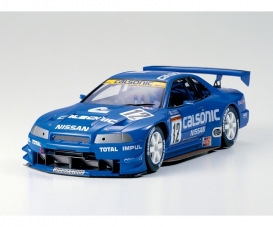 Article number: 300024219 Product: 1:24 Calsonic Skyline GT-R (R34) The unrivaled Nissan Skyline GT-R of the 1970's Japanese touring car races valiantly returned to the race circuit in 1990. Equipped with 2.6l, inline 6-cylinder twin turbo engines, two R32 Skyline GT-R's brilliantly triumphed in all six races. Particularly impressive was the bright blue Calsonic Skyline, which achieved five of the six victories to take the series championship. In 1993, the Calsonic Skyline was converted into a GT machine and brought out for the All Japan GT Championships, where it took top honors for three years running. From the middle of the 1995 season, the R33 version of the Skyline GT-R was brought out. The R33 was based on the 4WD production car, but was instead equipped with rear wheel drive. For the 1999 All Japan GT Championships, Nissan brought out a new machine, the R34. Compared to its predecessor, the R33, the R34 was constructed more compactly, with a narrow wheelbase. It was developed to take advantage of the reinforced chassis used on the production model brought out in January of that year. Except for the roof, the body was completely remade in carbon fiber and equipped with a large, curved wing on the rear- just one example of its aerodynamic and stylish form. Undergoing constant improvements since 1990, the inline, 6-cylinder DOHC twin turbo engine of the R34 is maximized with a 6-speed sequential transmission and rear wheel drive. The latest incarnation of the Skyline GT-R, the R34, promises to add more GT Championship Titles to Nissan's illustrious racing history. Calsonic GT-R (R34) 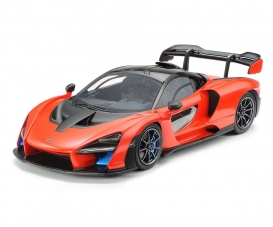 Article number: 300024355 Product: 1:24 McLaren Senna Item Contents/Information • This is a 1/24 scale plastic model assembly kit. Length: 198mm, width: 91mm, height: 60mm. • The sleek aerodynamic body’s form is captured in style. Uniquely, it is composed of a single monocoque part onto which body panels are attached individually, allowing a highly realistic depiction of the car. • Parts are designed to be assembled into blocks of the same color, streamlining the painting process. • Features a realistic depiction of the V8 twin turbo engine and visible sections of the complex surrounding engineering. • The model can be assembled as European, U.S. or Japanese spec. • Separate parts for brake calipers and discs ensure that while the wheels (and brake discs) rotate, the caliper remains stationary for super realism. • The dashboard can be assembled in the standard roadgoing or streamlined racing positions. • Metal transfers recreate McLaren logos and more. 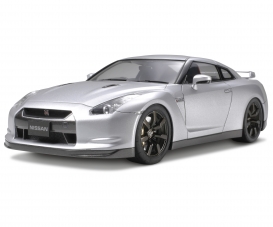 Article number: 300024300 Product: 1:24 Nissan GT-R Streetversion At the 2007 Tokyo Motor Show, much attention was paid to the new Nissan "multi-performance sports car." This model had dropped name Skyline and became simply the Nissan GT-R. Along with the name change, the car also had some other mechanical changes, especially under the hood. Gone is the straight six, and in its place there is a new twin-turbo V6, which has an amazing 480 horse power with 60kg of torque. With amazing speed and cornering ability, the GT-R has reached the super car plateau. Nissan GT-R 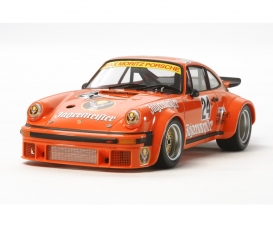 Article number: 300024328 Product: 1/24 Porsche Turbo 934 Jägermeister The Porsche Turbo RSR 934 was a descendent of the world-famous Porsche 911 Turbo, and appeared for the first time in the Group 4 GT class in 1976. The rear-mounted 2,994cc turbocharged flat-6 engine was capable of 260hp, making it a top-of-the-line production car at the time. This model, covered in the famous Jagermeister livery, sped to victory in both the European GT Championship and the German Sports Car Championship in its debut season. The Tamiya assembly kit model faithfully captures all the details of this famous racing car in 1/24 scale. 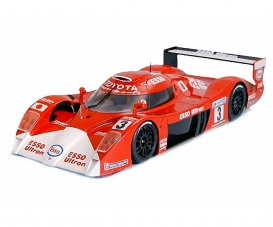 Article number: 300024222 Product: 1/24 Toyota GT-One TS-020 LeMans ´99 About the Toyota GT-One TS020 "The Longest Day in France", also known as the 24 Hours of Le Mans endurance race, takes place two hundred kilometers southwest of Paris, in the city of Le Mans. This high-speed circuit is made up of public roads closed off for the race, which stretch to 13.6 kilometers in length-the world's longest circuit track. Throughout the long history of the Le Mans, two or three major manufacturers have always fought for the top honors, but the 1999 race boasted six major contenders. The Toyota GT-One TS020 led the grueling 24 hour event right up until one hour before the finish, when it was struck with an untimely tire blowout, but still managed to finish second. Subtle refinements to the sleek carbon fiber composite body of the GT-One TS020 were conducted in the pursuit of optimal aerodynamics. The 3600cc V8 twin turbo R36V engine also underwent various modifications, improving power, torque, and fuel efficiency. About the Model • 1/24 scale plastic assembly model kit based on the GT-One TS020 of the 1999 Le Mans. • Overall length: 202mm, overall width: 84mm. • This model boasts faithful recreation of innovative aerodynamics. • Highly detailed nose and diffuser-just like the full size car. • Rear cowl is removable, allowing modeler to view the detailed V8 twin turbo engine even after completion. • Kit includes decals for Car no. 1 and 3. • Masking seals are also included for accurate body painting. 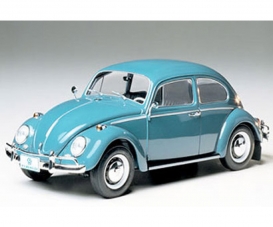 Article number: 300024136 Product: 1:24 Volkswagen Beetle 1300 1966 Even in this age of sophistication, the popularity of the Volkswagen "Beetle" has not diminished. The original design dates back to the 1930"s when Dr. Ferdinand Porsche provided the design framework for the "People"s Car." Today, with more than 20 million units produced, the Volkswagen Beetle has become a symbol of mass-produced motorization, with no other vehicle exceeding this figure. Built upon the sturdy platform chassis is the amazingly reliable air cooled, flat-four cylinder engine. Suspension is four wheel independent for crisp handling and driving comfort. Although the onset of the Second World War greatly hindered Volkswagen"s marketing opportunities, it made a superb comeback shortly following the conflict, under the skillful guidance of Heinrich Nordhoff. Throughout its production life, the Volkswagen was continuously improved to meet modern automobile standards. An enlarged powerplant displacement and better visibility are two of the notable changes that enabled the Beetle to set standards for the compact car market, decade after decade. The 1966 Volkswagen model is regarded as the classic Beetle, one that retains the most of the original design traits, and it has become a collector"s item. Even today, more than half a century later, watching a nimble street bug is still a pleasant sight to behold, and its unmistakable shape will likely delight generations to come. Volkswagen 1300 Beetle   Warning! Not suitable for children under 14 years. 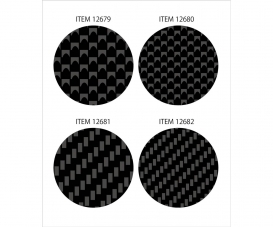 Article number: 300012682 Product: 1:6/1:12/1:24 Carbon Dekor Köper/Ex.Fein Carbon weave decals are a great way to enhance your models level of realism. Many of Tamiya’s car and motorcycle subjects have parts that depict raw carbon parts, such as winglets, spoilers, and body panels. With Tamiya carbon fiber decal sheets, you can easily replicate these parts on your model with relative ease. Simply cut to the size and shape of the section that you want to cover, and apply. When used in conjunction with Tamiya MARK FIT and MARK FIT STRONG (Tamiya’s decal setting solution solvents), forming the decal sheet to curved surfaces make application even easier. • Sheet dimension: 130mm x 190mm x1. • Sheet features no pre-marked shapes and can be cut to desired shape and size. • Great for use on static models of bikes, cars and more from 1/6 to 1/24 scale. . 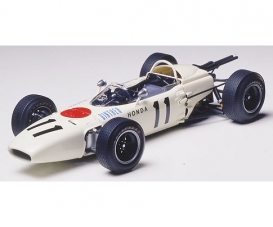