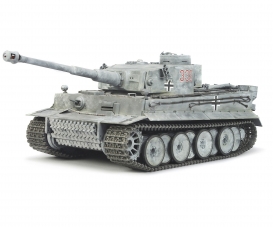 Article number: 30006010 Product: 1/16 RC Panzer Tiger 1 Full Option Tamiya has put incredible power and versatility of the German Tiger I in your fingertips with this 1/16 scale, fully functional R/C tank. Just some of the many functions this tank is capable of have been recorded in the video clips below. First check out the firing of the main cannon, complete with true to life flash and cannon recoil. The shot is so powerful that it actually causes the tank itself to recoil, just like the full size Tiger I. Then, click on the next image to see the cannon rotate, tracking down the enemy and preparing to fire. Next is the firing of the authentically recreated 7.92mm MG34 machine gun! Finally, take a gander at how the Tiger I moves on its durable resin and metal tracks. *1/16 scale Radio Controlled Assembly Model Kit (overall length: 530mm, overall width: 232mm) *A four-channel RC unit is necessary to operate this kit. Two 7.2V Tamiya Racing Packs (or equivalent) and charger are also required. Powerful Engine Sound Just about every sound the real Tiger I made can be made on Tamiya's 1/16 scale Tiger I. When the tank is switched on, either a manual crank start sound, or an automatic engine start sound is heard. After your engine is turned over, its time to move the tank around. As you accelerate, the engine thundering increases just like the real Tiger I. Stop the tank, and the sound of authentic idling begins. Once you have located your target, rotate the massive turret and listen to the grinding of gears of the real German war machine. The more you control this R/C tank, the more you will feel like the commander of the full size Tiger I ! The front-mounted gearbox contains two Type 380 motors that can operate together or individually to produce forward/reverse running and pivot turning. Metal torsion bars and suspension arms combine with the wide tracks to smoothly absorb bumps and dips in th R/C Tiger I Early w/Option Kit   Warning! Not suitable for children under 14 years. 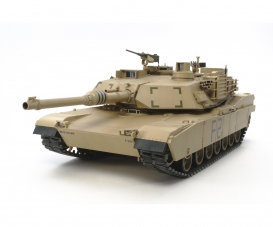 Article number: 300056041 Product: 1:16 RC US MBT M1A2 Abrams Full Option The latest super-realistic model in the 1/16 scale R/C Big Tank Series recreates that modern day U.S. stalwart, the M1A2 Abrams. The Abrams has been around since the early 1980s, with constant upgrades to ensure that it stays at the cutting edge of military technology. M1A2s were introduced from 1992, developed to be chock full of front-line technology and bring the M1 into the digital age. They featured depleted uranium armor, a modified commander’s cupola and more, and saw action in the conflict in Iraq in 2003. About the Model • This is a 1/16 scale R/C model assembly kit. Length: 615mm, width: 231mm, height: 190mm. • Expertly recreated angular Abrams form includes depictions of anti-slip surface textures. • The chassis is powered by a gearbox with Type 540 motors and features metal parts such as lower hull, suspension arms, drive sprockets and more, for excellent durability. • Aluminum gun barrel has traverse and elevation/depression movement, thanks to a servo and Type 130 motor. • Multi-Function Unit is made up of turret and vehicle control units. It allows control of various movements via separately sold transmitter. These include turret rotation and gun elevation. It also ensures that a range of realistic sound and light effects (headlights, taillights, barrel flash) are paired with model actions. • Gun barrel control system can train the main gun in a single direction, which it remains pointed in even as the tank moves or climbs, and the turret rotates. • The included dual speaker offers highly realistic sounds. • Durable resin pre-assembled tracks feature metal pins and connectors. • Compatible with the Battle System (Item 53447) for fun and interactive battles with friends! • Requires a 4-channel transmitter with self-neutral function, battery pack and transmitter batteries.   Warning! Not suitable for children under 14 years. 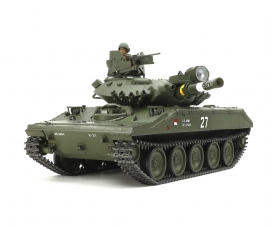 Article number: 300056043 Product: R/C M551 Sheridan w/Option Kit Tamiya is delighted to announce another new addition to our ever-expanding series of super-realistic 1/16 scale R/C armor, in the shape of the rather unique M551 Sheridan. The M551 was designed as airdrop capable armor with wading capabilities, a key concept as the U.S. took on the role of global policeman post-WWII. With an aluminum hull and rolled steel turret, it weighed just 15 tons, but had impressive firepower in the shape of the M81 152mm gun/launcher, which could fire standard rounds and MGM-51 Shillelagh missiles. The M551 was in service with active units from 1968 to 1996, and saw action in the jungles of Vietnam. About the Model - This is a 1/16 scale R/C model assembly kit.   Length: 408mm, width: 177mm, height: 186mm. - The form of the lightweight M551 and its powerful M81 gun is   captured with aplomb. - Die cast components for suspension arms, sprocket wheels,   idler arms and more; excellent durability. - Utilizes an aluminum gun barrel for superb accuracy. - Offers a full range of movement: forward and reverse, a variety   of turns, turret rotation and gun elevation. Suspension features a   coil spring for each of the 10 suspension arms, giving the model   excellent mobility. - Firing of the main gun is accompanied by an LED flash,   realistic recoil, and vehicle kickback. Machine gun also produces   LED flashes when fired. - Authentic engine and firing sounds were recorded from a full-size   vehicle and are coordinated with model actions. A large speaker in   the model ensures rich sounds. - Turret upper section is secured by magnets, allowing hassle-free   access to the electronics within. - A plethora of lights are recreated, including the turret front   searchlight. They can be operated via transmitter. - Assembled link type tracks have elastomer recreations of the rubber   pads for an authentic look. Multi-Function Unit Battery & Charger   Transmitter Motors   Warning! Not suitable for children under 14 years. 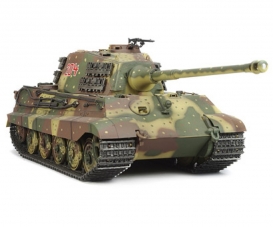 Article number: 300056018 Product: 1/16 RC Panzer Königstiger Full Option Tamiya continues to develop its 1/16 R/C Tank Series. The fourth full-option kit to make its appearance is the German Heavy Tank King Tiger. Not only can the model move forward and backward and turn with a great sense of power, but the turret can be rotated and the 88mm gun raised and lowered. To imitate the firing of the main gun and of front machine gun, light flashes while sound is heard. The sound of the engine has been recorded, with the assistance of the French museum of Saumur, from a real Maybach HL230-P30 engine of the only King Tiger kept in working condition in the world. Not only all stages of engine sound (idling through full throttle) but also all the metallic clanking of the tank tracks have been thoroughly recorded. During the second half of WWII, Zimmerit coating was applied on German tanks to protect them from the threat of magnetic mines. For this kit, the Zimmerit coating has been replicated with a unique relief printed seal. Thanks to this seal, you can now represent accurately a late war King Tiger with great ease. About the German King Tiger (Henschel Turret) The German Heavy Tank King Tiger made its appearance during WWII in 1944. The chassis front armor was 150mm thick with 80mm thick side armor and powered by a 700hp Maybach HL230-P30 engine. The Henschel and Porsche companies came up with rival turret prototypes. The first 50 tanks produced had Porsche turret whereas subsequent tanks were equipped with the Henschel designed production turret that featured many improvements over the first model. The King Tiger was armed with a 71-caliber 88mm gun that had enough power to pierce 150mm thick armor from 2000m away. Between The beginning of production in Summer 1944 and March 1945, 440 units were completed. Due to the havoc wreaked by the King Tiger during the final German offensive on the Ardennes front in December of 1944 R/C KING TIGER w/Option Kit   Warning! Not suitable for children under 14 years. 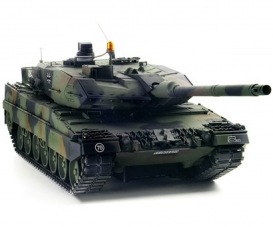 Article number: 300056020 Product: 1:16 RC Panzer Leopard 2A6 Full Option Widely recognized as the best modern day Main Battle Tank (MBT), Tamiya introduces the latest German Leopard 2 tank, the Leopard 2 A6, to the 1/16 scale R/C tank series. Tamiya's biggest R/C tank ever, it's just like driving the real thing! About the Leopard 2 A6 Used by more than 10 European nations, Germany's Leopard 2 tanks are a perfect balance of firepower, protection, mobility and availability. With the Leopard 2A5 regarded as the most powerful tank in the world with superior protection and fire power, the latest Leopard 2, the 2A6, features an even more powerful weapon system. The Leopard 2A5 featured replaceable wedge shaped armor on the turret, improved PERI-R 17 panoramic Commander's sight with thermal vision, spall liner on the turret interior for protection against splinters, all-electric gun control and stabilization system for easy maintenance and reduced noise, GPS navigation system, electro-pneumatic driver's hatch and a CCD camera mounted on the rear of tank for high-speed reversing. The Leopard 2A6 featured improved firepower including a 55 caliber 120mm smoothbore main gun utilizing kinetic energy LKE II ammunition for higher muzzle speed and lethality. The 2A6 has been employed by the German 403 tank battalion since March 2001, and is scheduled to replace all German 2A5 tanks by 2006. The use of the 2A6 continues to spread throughout Europe with the Netherlands, Spain and Greece adopting the 2A6 for their main battle tank. With continued improvements the 2A6 continues to set new standards as the world's best MBT. R/C Leopard 2 A6 w/Option Kit   Warning! Not suitable for children under 14 years.